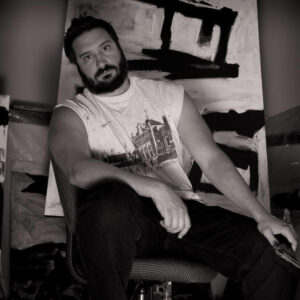 Taj studied art throughout his young adult years in the Washington D.C. area even attending classes at universities & museums throughout and the Illustration Academy in Richmond, Virginia. In 2003, Taj graduated with a bachelor’s degree in Illustration & Graphic Design in at KCAI. After an accident that injured his dominant hand in the summer of 2016, Taj began experiencing chronic pain which inevitably influenced his work. He left his life of working as a graphic designer and illustrator to pursue a new way to tell his stories with art. Driven by a focus on technique, Taj has pushed to learn new ways of drawing that he can approach ambidextrously. In 2018 he introduced #DrawEveryDay – a way to force take time each day to make one work on paper. Taj approaches art in a relentless pursuit with bold, expressive marks to give the work a sense of movement that is both purposeful and unavoidable. In all of his work, he pushes for a balance between an overwhelming sense of both intention and tranquility.